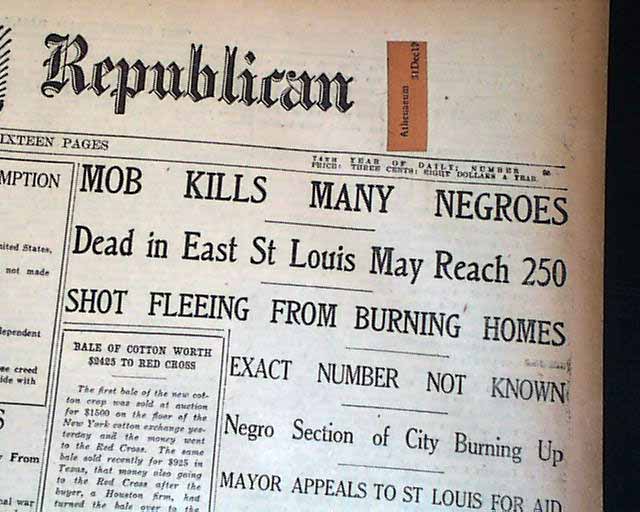 July 2, 2017 commemorates the 100 year anniversary of the one of the bloodiest race riots of the 20th Century.  Looking at the racial tensions this country has seen over the last few years, it seems only fitting to look back at the events that went on that day and the last legacy it left on the area.  For starters, the presence of Blacks in East St. Louis to begin with was common to not only the area, but to many major industrial areas during this time period.  With the Unites States’ presence in World War I taking a large chunk of the labor force away, there was an increasing need for labor in factories along the Mississippi River.  With this need present, a large influx of blacks entered into East St. Louis to fill positions with both the Aluminum Ore Company and American Steel Company.

The beginning stages of the riots began on May 28, 1917, shortly after a city council meeting ended.  With fears of job and wage security due to the presence of the new black competition, several angry white workers filed formal complaints against the black migration to the mayor.  As the meeting ended, news of an alleged attempted robbery of a white man by an armed black man spread through the city.  Enraged by the news, a mob of whites took to the streets and began to attack any and every black face they could find walking the streets or riding in trolleys or streetcars.  With limited interruption from the police, the violence continued for hours until the National Guard was finally called in to help disperse the mob.  Within the following weeks after the initial disturbance, not much was done to help ease the employment issues allowing for tensions to slowly rise again.  Then on July 2, 1917, about a month after the initial incident, a car full of white men drove through a Black neighborhood of East St. Louis and shot into a crowd of Blacks standing around outside.  About an hour later, another car, this one including police officers and a journalist, entered the same area and was shot at by Black residents fearing further attacks. As knowledge of one officer being killed and another wounded circulated, another white mob formed and entered into the Black section of the city seeking revenge.  Buildings were set ablaze and those fleeing the burning buildings shot in the street.  Along with this, several Blacks within other areas of the city were either lynched or beaten to death.  With the National Guard no longer in the area having been sent away on June 10th, the police were looked up by the Black community as their only chance at survival. Unfortunately for them, the police in the area allowed the violence to ensue, fled the scene with any care to what was going on, or joined in on the riot themselves.  In the aftermath of the riots, while the death toll ranged between 40-200 black lives of all ages (the actual number was never confirmed), upward of 6,000 Blacks were left homeless due to the destruction of their neighborhoods.  The rest of the nation quickly took notice as W.E.B. DuBois and Marcus Garvey both spoke out about the carnage that was allowed to occur in East St. Louis.  Following the riots and the major destruction to their neighborhoods, a large number of the Blacks left East St. Louis and moved westward across the Mississippi and settled into the all-black city of Kinloch.  Because of the riots and the restrictive covenants within the city of St. Louis, Kinloch would swell in population as more black migrants entered into the area for industrial jobs, but saw limited options on to where to reside.

Once a city of refuge and promise for many black migrants from the South, the common theme for inhabitants now is as much a pride of where they came from as it is a strong desire to flee the city for better living conditions, educational opportunities for their children, and away from a city that has become crime ridden.  Unfortunately, the story of East St. Louis over the last century has not always been a positive one.  As industry has mostly left the region, it is more known today for the vice within the city, than the strong community still left there.  We are left to wonder if the city can ever really recover from that horrible and bloody day.  I guess we will just have to check back 100 more years from now.