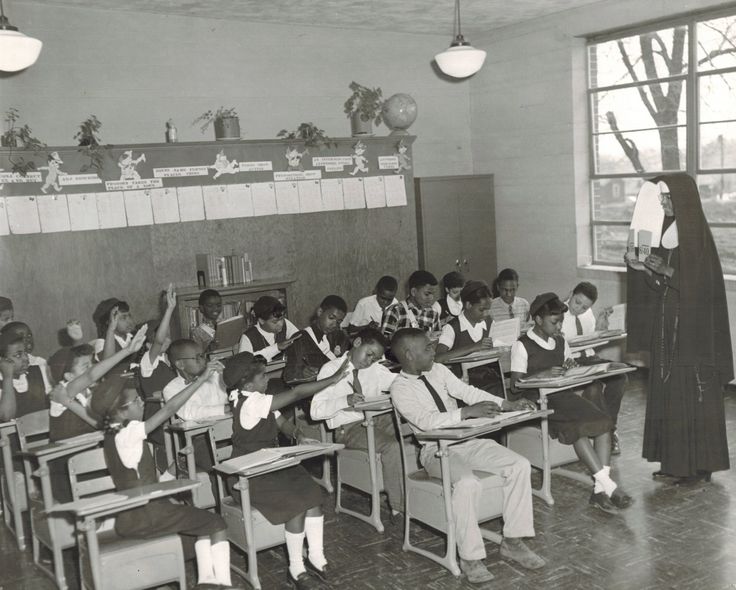 The playground was concrete. In the 1990s, the all-black Catholic school, which nested within a once-flourishing farming community, now had no vegetation in sight except for the grass within the gated yard of the rectory where the white priest stayed. At recess, kickball was the main event.

Three potholes served yard duty as bases, and a large crack in the pavement near the rectory gate marked home plate. We were fierce competitors, with games carrying over into the next school day and arguments often arising over remembering score. However, fights were always kept to a minimum because every student and teacher had a relative in every grade level, and every family had schooled together for generations.

Roaches marched the main hallway and policed every corner of the cafeteria. These brown soldiers were ever-present, often blending in while providing trails  of evidence to a decaying dream. At breakfast and lunch, grandmothers instead of “lunch ladies” cooked and served full meals. Fried chicken with rice and gravy, beans and cornbread, shepherd’s pie, and deep fried catfish with spaghetti are a few of the family recipes that they contributed toward our development. The grandmothers were infamous for holding children back from recess until they finished their meals; but these elders would also offer second plates or even thirds to any child who would miss dinner later that night.

The predominantly black female faculty taught Language Arts, Science, Math, African American History, and Music with passionate rigor. They took turns staying late to run the after-school care program, where students could only watch movies and play games after completing their homework. At 3pm, yellow buses never appeared. Teachers, Cafeteria Grandmothers, and parents all pitched in each day to transport students back home in small vans that ran just well enough to get around Kinloch and the nearest Ferguson and Berkley neighborhood streets. The transportation team would meet at school again early the next morning to dispatch the vans and get all the students back to the cafeteria in time for breakfast.

Each quarter, the principal gathered everyone in the hallway of the shotgun-style school building to celebrate student attendance, character development, and academic achievement. From pre-Kindergarteners to 5th graders, everyone would erupt with praise, as the principal passed out each certificate, always calling every child’s name, whether they were present that day or not. At the end of the school year, the teachers took only a couple weeks off in Spring before returning to keep the caregiving and academic enrichment flowing through the sweltering summer months. From June through July, yellow jackets hovered the school yard like bomber planes, resulting in shortened recesses and West African dance and hand-drumming in the multi-use cafeteria as a suitable substitute. Twice a week, we performed indigenous dances, sang songs in Kiswahili, and played storytelling rhythms that our young minds learned quickly because our spirits intuitively remembered. We learned how to value family and home in so many ways.

Changes appeared every Fall school term as more student-families residing in Kinloch became homeless. Through the new soundproof windows of the school, we watched Lambert Airport seize the housing land around us with vigor. Rebelliously, we continued to still experience home within the school walls that were bricked with community, culture, and care. However, as institutional hunger devoured every acre of life that Kinloch produced, family-owned stores closed; law enforcement and fire department efforts disappeared; and deep down we knew the roaches had won.

In 2002, the Archdiocese of St. Louis terminated our school, telling the faculty that not enough “Catholics” were enrolled to keep it open. The Archdiocese Office of Archives and Records posted this sole memory of Our Lady of the Angels School on its current website, with our principals and teachers only recognized as “lay staff”:

Holy Angels, a.k.a. Our Lady of the Angels, was established in Kinloch, aka Angelum, Robertson, in 1931. Located at 8122 Scott Avenue, its second church was built in 1952. It served as a Jesuit Mission from 1923-1931, and was staffed by Jesuits. In 1952 archdiocesan priests became its pastors. Its school was run by the School Sisters of Notre Dame (1931-1955) and later the Oblates of Providence (1955+), followed by a lay staff. When it was closed in 2002, the property was donated to the City of Kinloch for a Museum and learning center, the church demolished.

Not only does this statement belittle the professional experience and educational levels attained by the black faculty members, but it also erroneously claims that the church was demolished. “You want to know what they did to that church?” asked a former Kinloch resident and church member in a August 2014 interview with a news reporter. “It’s a nightclub now.”  The church was sold in the mid-2000s and turned into a late night entertainment venue called The Cotton Club, which has since closed down some time within the past couple of years.

Plucked like cotton, residents first experienced eminent domain evictions in Kinloch in the 1970s when the City of St. Louis began purchasing acreage to expand airport grounds. The rate of evictions took a huge leap in 1982 after the successful arrival of Trans World Airlines in St. Louis. Other nearby working-class towns, like Bridgeton, were also majorly impacted by the airport property expansions; however, the affect these efforts had on Kinloch was particularly devastating with the small city being home to thousands of African-Americans whose families had escaped racial oppression in the South only to be greeted by further racial discriminatory practices in the employment, housing, and education sectors in the Gateway City. Back in 1948, these migrant black families incorporated Kinloch, making it Missouri’s first black city and planted seeds of  southern hospitality and African village values to cultivate the land. More black families arrived in Kinloch, in the 1950s and 1960s as public housing projects like Pruitt-Igoe in St. Louis City became overcrowded and proved to be hazardous living environments. Businesses prospered and several schools existed in Kinloch prior to St. Louis City when interest peaked in buying out the land in the 1970s and 1980s. After that, everything vanished.

“Whether you chose to accept it or you chose to fight it, you knew eventually, you’d have to leave. There was this feeling of helplessness. We were essentially and effectively gobbled up.The airport took that sense of community and eradicated it.”

Our Lady of the Angels was Kinloch’s last school and last hope. Black students/families needed a place to go. Although it became theoretically legal for black children to begin attending predominantly white public schools shortly after Brown vs. The Board of Education ruling in 1954 , a formal desegregation plan was not established in St. Louis until 1983. Even after then, black students who attended predominantly white institutions began experiencing out of school suspensions at alarming rates, as white school administrators reacted to federally imposed integration. This caused many black parents to seek private schooling in religious-based institutions as a seemingly safer alternative to the oppressive treatment in public schools. Despite the burdens of transportation and tuition, Our Lady of the Angels School in particular became a prominent choice for black parents who lived outside of Kinloch yet wanted their children to experience an African-centered educational environment.

As Kinloch residents had to seek housing elsewhere, the school became filled with students who lived in other municipalities seeking relief from the oppressive experiences in predominantly white school districts. Parents could experience joy witnessing their children exemplify higher levels of confidence in their black skin, black voice, and black culture. Students not only saw pictures of historical black leaders on school walls, but were, perhaps more importantly, exposed to positive black leadership firsthand in every classroom. No matter where they were from, as long as black children kept growing, Kinloch still had a chance at surviving. Hence, when Our Lady of the Angels School closed down and its playground was emptied, Kinloch’s last breath exhaled with it.

A community is only as strong as its youngest generation. The best way to take a community out is to halt its education. Get rid of the children, and you will forever erase the population.